Interactive resources you can assign in your digital classroom from TPT. 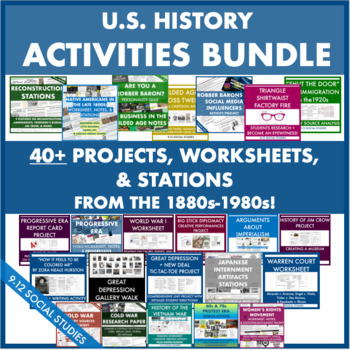 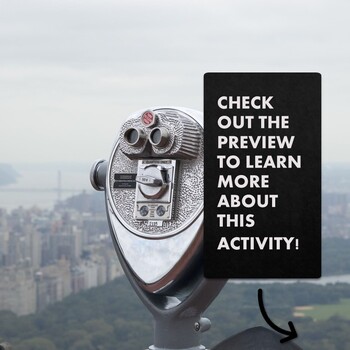 Social Studies with Ms Mc
301 Followers
Follow
Includes Google Apps™
This bundle contains one or more resources with Google apps (e.g. docs, slides, etc.).
Easel Activities Included
Some resources in this bundle include ready-to-use interactive activities that students can complete on any device. Easel by TpT is free to use! Learn more.
DescriptionStandards8Reviews4Q&A

Check out this bundle of my favorite activities from my American History course—from pre-colonization through Reconstruction! Get students active and engaged with these student-centered ACTIVITIES ranging from the 1880s-1980s!

I LOVE designing student-centered activities for my students. Use these ready-to-go activities in your classroom!

My teaching style involves a short, teacher-centered introduction of content before letting students dive into the material themselves. This is great for students' learning--but means a LOT of planning and lesson-designing from me. Use these activities in your American History classroom and save yourself lots of time!

I've also included a "Teacher Tips" document as a bonus file listing the order I'd use these assignments & other suggestions.

· Massacre at Wounded Knee and Battle of Little Bighorn

· Robber barons/captains of industry and the rise of big business

· Susan B. Anthony and the women’s suffrage movement

· Causes of World War I

· Growth of the Suburbs, Baby Boom

Check out the previews of the various resources to see some of the great activities you'll get!

Note: Files are generally PDFs or ZIP files including PDFs!

Get TpT credit toward future purchases!

Please leave a quick rating and comment for this product. From your My Purchases page, click the "Provide Feedback" button. TpT will give you feedback credit -- lowering the price of your future purchases! Plus, your feedback helps me create better resources for my students AND you! ☺

Click the green star next to my store logo. Become a follower to receive email updates about my resources!

Are you getting the free resources, updates, and special offers we send out every week in our teacher newsletter?